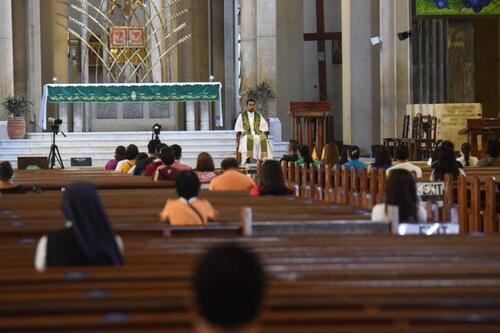 In one of the most Catholic countries in the world, with eight-six percent of the population identifying as Catholic, the pandemic has posed a unique challenge to the practice of the religion. In the early months, churches in major cities were closed entirely and daily masses were livestreamed for people to watch from home in the Philippines and across the diaspora. Such was the case in Metro Manila, under Duterte’s strict lockdown that closed down all activity and borders. This months-long lockdown was finally eased though in mid-August of this year and allowed churches in the city to resume in-person operations at a highly reduced capacity. However, as the Strait Times reports, masses are still far from normal. At Baclaran church in Paranaque, Metro Manila, where thousands of devout Filipinos used to flock, the pews now only have capacity for about six people or groups per three aisles. Furthermore, face masks must be worn at all times, even when receiving the holy communion. The holy water in their normally ornate, elaborate fountains lay still and covered up to prevent access. Even religious statues and iconography have been taken out of the church, in order to prevent folks from touching and kissing them.

As opposed to other religions, or even other activities that have translated themselves well virtually, Catholicism has a strict belief in the practice of holy communion every Sunday. The weekly receiving of the body and blood of Christ is integral to one’s faith and practice of the religion. Interestingly, although the Philippines has some of the highest COVID-19 numbers in Southeast Asia and Manila is the main hotspot, Baclaran church encourages people to attend mass in-person. They have this message posted on their website: “We would like to remind everyone that live streaming is not a substitute for the actual mass in the church.  We advise that all still need to attend masses in their Churches. Those who, due to their illness, could not go to Mass; or those who, due to their locations, do not have Churches to go to, live streaming may serve as a secondary alternative.” To hold the sacrament of communion over public health and safety is very telling of how devout the country is.

For some actually, this tension between the practice of faith and public health does not exist. For them, going to mass and receiving the body and blood of Christ, is actually what will keep them most safe from the virus. In the article, 75 year old Ms. Rederacion Parina, walked the six kilometers from her home to Baclaran to attend mass when it first opened and wept when she arrived. “My body is gaining strength when I go out (to visit the church)… I feel calm,” said Ms Parina, lifting her face shield to wipe away tears. “When I’m stuck at home… I feel like I’m nearing my end.” In this same vein, Reverend Victorina Cueto relays that   “a lot of people… feel the connection is not as intense or not as real.” From these comments and the public announcement of the church, it is clear that religion is integral to the lives of Filipinos, being for some the biggest factor in decision making in this time of prolonged crisis. How COVID-19 might impact important religious and cultural practices in the Philippines besides mass in the coming months, such as Advent and Christmastime in the next couple months or Holy Week next April and the Passion should be interesting to watch unfold. How will the Filipino people adapt? The answers to these questions should reveal more about the role religion plays in Filipino society, especially in relation to public health and safety.