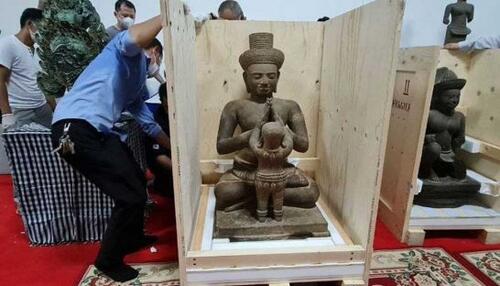 This article describes how in late September of this year, five Khmer statues were returned to Cambodia from the collection of Douglas Latchford.  Despite being a self-proclaimed “rescuer” of more than a hundred Cambodian antiquities, Latchford is an incredibly controversial figure and widely considered to be a looter. Prior to his death in 2020, he was under felony indictment for “his alleged decades-long involvement in trafficking stolen Khmer antiquities.” These five statues are to be evaluated and restored by the National Museum in Phnom Penh before being put on display. According to a spokesperson for the Ministry of Culture and Fine Arts, Latchford had kept these pieces for himself rather than sell them in illegal markets. In January of this year, the Ministry of Culture and Fine Arts announced that following Latchford’s death, his daughter has decided to return his entire collection of Khmer antiquities back to Cambodia, these five statues marking the start of what will be a years-long process to do so.

What this article does not explicitly mention is that the sculptures in Latchford’s possession carry incredible religious and spiritual significance. These antiquities not connect to a long artistic tradition, but also a spiritual one. These works depict Buddhist and Hindu figures and stories that have been centered in Khmer civilizations for centuries. Though now overflowing with tourists, sites like the temples of Angkor are active religious monuments, populated by monks and other religious figures and visited by Cambodians who still practice the faiths that these temples were erected in the name of starting over ten centuries ago. In an article published in the Washington Post, Phoeurng Sackona, the Cambodian minister of culture and fine arts, is quoted as saying, “These objects are not just decorations, but have spirits and are considered as lives…. It is hard to quantify their loss to our temples and country — losing them was like losing the spirits of our ancestors.” These statues are very much alive, and perhaps even referring to them as “antiquities” situates their significance solely in the past. These items looted by Latchford are displayed in and held by many prominent museums in “Western” countries, including the Metropolitan Museum of Art in New York City, the British Museum in London, and the National Gallery of Australia. I’m interested in exploring more how their transfer from active cultural and religious sites in Cambodia to museums dedicated to the preservation of cultural history has situated the popular global image of Cambodia in relation to modernity. Do the implications change at all if these statues are on display in Cambodian museums rather than non-Cambodian ones?