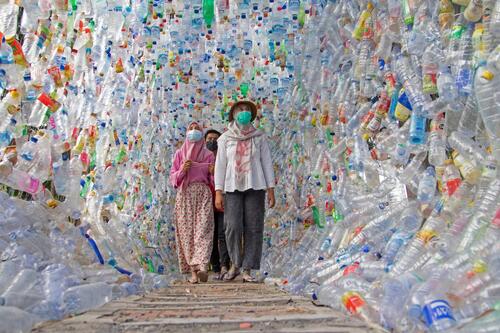 Indonesian environmentalist activist group Ecological Observation and Wetlands Conservation built a museum entirely out of plastic items, like bottles and bags. Over 10000 plastic items were used in order to put the world’s worsening ocean plastic problem, with the goal of getting people to rethink their use of single-use plastic products. All of the plastics used in the exhibit were collected from polluted beaches and rivers. It took over three months to build, and it is located in Gresik in East Java. The issue of plastics in the ocean is particularly relevant to Indonesians. Second, to only China, Indonesia has some of the highest plastic concentrations in its seas. China, Indonesia, the Philippines, and Vietnam are responsible for more than half of all ocean plastics.

The focal statue is called “Dewi Sri”, a goddess of prosperity widely worshipped by the Javanese. Her skirt is made from single-use bags holding household items. There seems to be an inherent critique of a hyperconsumerist economy, but the statue, in particular, seems to be critiquing that hyperconsumerist prosperity that can lead to conflict between necessity, desire, and excess. And with catastrophic climate change imminent, the display could be important in local changes in single-use plastic consumption. As of October 4th, it has seen more than 400 visitors.

Ultimately, I struggled to find any original local reporting on the exhibit, but it was picked up by larger outlets like Reuters and CNN.  President Joko Widodo was criticized earlier this year for his “wait and see” approach to climate change. Yet there have been government proposals to try and achieve carbon neutrality (although on a much slower time line than other major emitters).