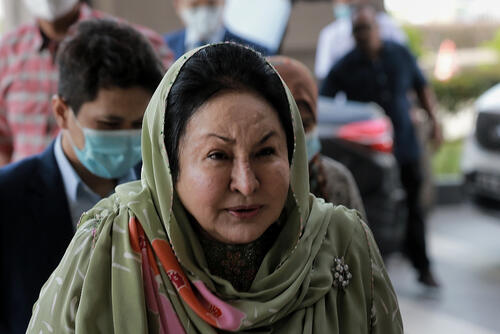 Datin Seri Rosmah Mansor, who famously had her extensive collection of Hermes Birkin bags and millions worth of rare diamonds, exposed to the public and seized at the fall of her husband, the former prime minister of Malaysia, Najib Razak, is back in court vehemently denying any responsibility to the charges of corruption and bribery while laying the blame on former aide Datuk Rizal Mansor. Rosmah further claims that Rizal’s testimony has been motivated to smear her name and reputation. One of the such claims that Rosmah refutes is that she hired an army of ‘cybertroopers with a salary of RM100,000 ($23,400) a month to defend her public image.’ The main charge in the case is that Rosmah received RM187.5 ($44.8 million) and RM1.5 million bribe from Jepak Holdings Saidi for a project to provide solar electricity to schools in Sarawak.

A question that must be present in the news coverage and portrayal of the trial as it unfolds, is how present is Rosmah’s and the former government’s influence in the system of governing in which she is being tried? In a government where corruption and bribery was ubiquitous, why would the result of this trial be separate? Rosmah’s lawyer’s argumentative approach is to position her as a scapegoat in a project where corruption and bribery was present and that her aide was in fact the ‘mastermind’ At the conclusion of many of these articles is a summarized info graphic with the main takeaways from the article. This is not a format that I have seen before from western news outlets and am interested in how these platforms are adapting to a new audience.